Sing You Home- A Book Set To Music 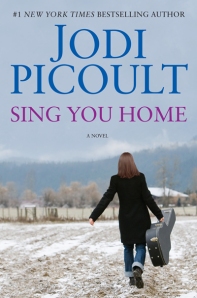 I just finished reading the latest Jodi Picoult novel Sing You Home. I was a big fan of Jodi’s novels for a few years. She uses a style similar to the one Barbara Kingsolver did in The Poisonwood Bible, with multiple narrators who each tell the story from their point of view. Although I really liked this method of storytelling at first I have to admit after reading my fifth Picoult novel I was tired of the style and took a little break. Picoult publishes a new novel almost every year. 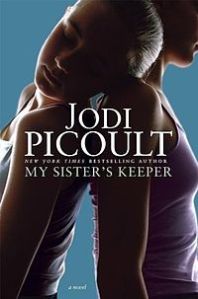 The first Picoult novel I read was My Sister’s Keeper. It was a novel I studied with my grade ten students at the Steinbach Regional Secondary School. I actually read it aloud to them and they loved it! They’d beg me to keep reading at the end of every chapter. Jodi’s novels are a good fit for teens because each deals with some controversial social issue and raises lots of questions. My Sister’s Keeper is primarily about organ transplants and the ethical issues surrounding them, but there were at least a half-dozen other social issues the book addressed as well, that made for great classroom discussion. 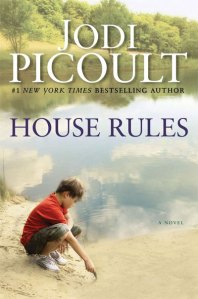 I read Picoult’s House Rules which deals with autism, Tenth Circle which is about date rape and Nineteen Minutes about bullying. Jodi has written other books where the characters must face the issues surrounding capital punishment, suicide and child abuse.  I kept quite a number of her books in my high school English classroom library in Hong Kong and they were rarely on the shelf, because they were so popular with my students.

In Sing You Home Jodi tackles the issue of gay rights.  Although it was a topic she had long wanted to address in a novel, it became more personal while she was writing it, because it was during this time her seventeen year old son told Jodi and her husband he was gay. The novel pits two lesbian women who want to have a child using frozen embryos, against a Christian fundamentalist church bent on preventing them from doing so. Jodi tries to represent both sides honestly. On her web page she gives detailed information about her interviews with a representative from the Christian organization Focus on the Family. She wanted to be sure she understood their reasons for opposing gay marriage and parenting.

She did extensive research into legal cases and sets her story in Rhode Island because it is a state that does not recognize gay marriage. Jodi admits this is one book in which she found it hard not to let her own personal biases take over. She usually tries to leave it up to her readers to decide what is the ‘right’ thing to do.

This book is unique in that the hardcover edition was accompanied by a CD of original music, since one of the main characters is a music therapist. Each chapter has an original song that goes with it and if you are reading the book on Kindle or in paperback you can listen to the songs on publisher Simon and Schuster’s website. Personally I think Jodi should stick to novel-writing. Her songs were a little trite.

One thing I always like about Jodi’s novels is you learn so much about new areas by reading them. For example when I read her book Songs of the Humpback Whale I learned many interesting things about whales. Before reading Sing Me Home I honestly was not aware of what a music therapist did, or how they are trained and I found out a great deal about that profession in this book. Music has enormous power and can be an important healing tool.

I think in this book, as well as some of Jodi’s others, the issues overtake the characters and the story. In Sing You Home there are pages and pages that describe  the court case for example, where Biblical passages and legal precedents are being quoted and it gets a little tedious. On her website Jodi does talk about the Bible verses that supposedly condemn homosexuality and has some thought-provoking things to say about them.  Her website is a better place for this discussion than the pages of the book, where getting all that information to the reader seems more important than telling us how her characters are feeling and reacting.

Jodi does make it clear that not all religious people condemn homosexuality. Although some of the Christians in her book are really sleazy hypocrites, into the prosperity gospel and accruing fame, others are depicted as more sympathetic, especially by the end of the book.

I found this book especially interesting to read because this past summer a sexual inclusivity motion was introduced at the national assembly of my church conference Mennonite Church Canada.

I still like Jodi Picoult as an author. However I used to go out and buy her books in hardcover as soon as they were published because I was so eager to read them. Now I am content to wait for them to go on sale in paperback at Costco.

One response to “Sing You Home- A Book Set To Music”