On Friday we went to Detroit to attend a Tigers baseball game as guests of Dave’s brother Paul and his wife Shirley. Attending Tiger games in summer is a Driedger family tradition that goes back to when Dave and Paul were young boys and their parents would take them to one or two Tiger games a year. Most summers when we would come to visit Dave’s family in Ontario a trip to Detroit to take in a game was part of the itinerary. If I was at home writing this post, instead of in southern Ontario, I’d include some cute photos I took of our boys when they were small at Tiger games, wearing Tiger shirts and hats.

Comerica Park opened in April of 2000. When Dave was young he attended games at Tiger Stadium about one mile away from the Tigers’ current home. Comerica Park is quite the place! It has a carousel with thirty hand painted tigers to ride on, life-size sculptures of famous Tiger players, a huge fountain, a ferris wheel with seats shaped like baseballs, five merchandise stores, a food court, batting and pitching cages for fans, and a hall of fame which provides a detailed pictorial history of the Tigers baseball team.

The outside of the stadium is adorned with fierce-looking tigers holding baseballs in their mouths. They reminded me of gargoyles. Whenever the Tigers score a run you hear the sound of tiger growling. Comerica Park is named after the Comerica Bank which used to have its headquarters in Detroit and donated a cool $66 million towards the construction of the new Detroit stadium .

Our seats were along the right field line. Dave insisted on holding a copy of The Detroit News in his hand while I took this photo—perhaps to prove he was actually in Detroit. Paul and Shirley are looking at him a little askance. Do we really know this strange man in the seats beside us?

The stands were packed on Friday night for the game against the Chicago White Soxs.  The Tigers’ star pitcher Justin Verlander was on the mound and he took a shut-out into the eighth inning when Chicago hit a home run. To be perfectly honest we didn’t see that home run because we left after the seventh inning.  The score was already 8-0 for the Tigers by then and we wanted to stop in at my nephew Tim’s house on the way home. He was having all the Driedger cousins over for the evening and we thought maybe we should crash the party for a bit. Our four children had flown out from Winnipeg and Saskatoon in the afternoon and we still hadn’t seen our nephew Beau who had driven down from London, where he is a student at Western University. 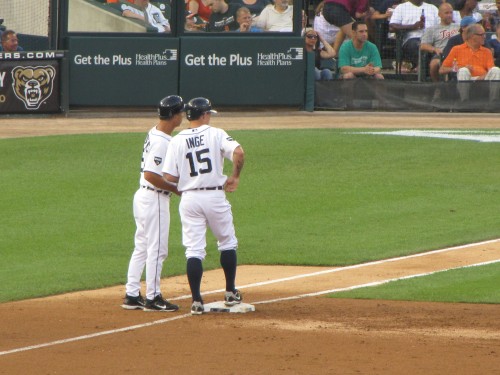 My favorite play of the game was Cabrera stealing second in the first inning. The highlight inning was definitely the 5th when Brandon Inge number 15 led off with a single and scored on a home run. Then later with bases loaded Peralta hit a double that scored three runs.  Paul and Shirley have a soft spot for Inge because of his kindness to their grandson Nash. At a family fun day at Tiger Stadium just after Nash had broken his leg, Inge spent a long time talking to Nash and even signed his cast.

One thing that struck me on Friday night was how baseball in America is so closely tied to the spirit of nationalism in the United States. ‘Love of country’ is somehow connected with ‘love of baseball.’  Lots of the fans around us had American flags they waved at key points in the game. A member of the armed forces took the game ball out to the mound before the first inning and was thanked for his service to his country. This is apparently a tradition at Comerica Park. Wounded military personnel were special guests of pitcher Justin Verlander at the game. They sat in an elite box and were recognized on the big screen and applauded at one point in the evening. Americans actually sing when their national anthem is being played. Several times during the game we were reminded by the announcer and by features on the electronic scoreboard that the Tigers salute America’s heroes in the armed forces and recognize their bravery and devotion.  It was an interesting mix of patriotism and sport that I don’t think is nearly as prevalent in Canada.

Close to where we were sitting was a brick wall that recognized many of the famous former Tiger players. I captured a few in this photo including the great Ty Cobb. As you can see from the people above the brick wall, it was standing room only at the game on Friday night. 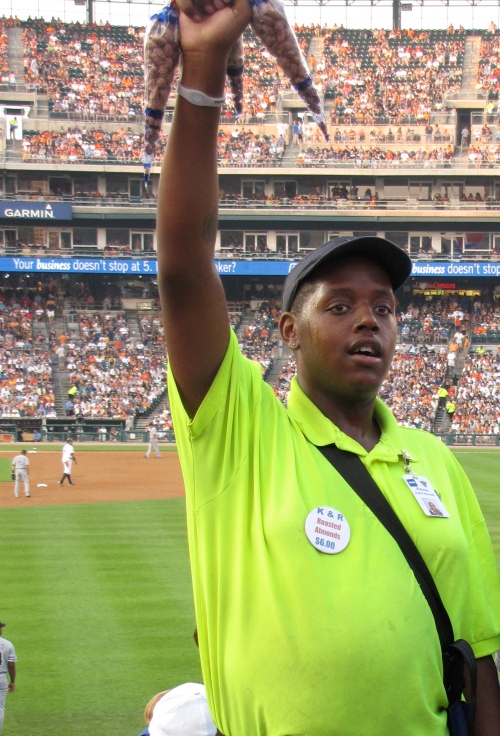 I think the hardest working people at a ball game are the vendors. It was so hot on Friday night and they walked up and down the stairs carrying containers heavy with whatever they were selling. They must be hoarse by the end of the evening shouting constantly to encourage the fans to buy things from them. I suspect they don’t have time to even follow the game.

What next? Well Dave has always said that one of his dream vacations during his retirement would be a trip to visit every major league baseball stadium in North America. There are thirty of them. Could be quite an adventure.